For Local peeps ( west Sussex ) , but hopefully it wont last too long

For any one local to west Sussex , it looks like its going to get worse  before it clears

A beach in West Sussex has been cordoned off after strong tides breached sea defences.

Solent Coastguard said flood defences at Pagham Beach, near Chichester, had been breached and part of the shingle bank washed away. 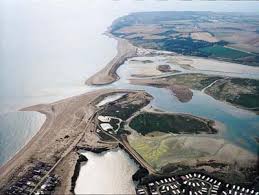 People have been urged to keep away from the area which is very dangerous, a spokesman said.

Coastguards, police, the Environment Agency and Arun council were at the scene overnight.

“The safety message from all the agencies is that this is a hazardous area and there is no reason for members of the public to be down there,” a coastguard spokesman said.

BBC reporter Simon Jenkins said large areas of the shingle bank and large boulders, which all formed part of a recently completed flood defence scheme, had been washed away over the past week.

Travel reports said Harbour Road, near Lagoon Road, had been closed because of coastal flooding.

Other parts of the Sussex coastline have seen cliffs collapse during storms and tidal surges.

A 9ft (3m) stretch of cliff at Birling Gap went into the sea on Saturday, and part of a cliff collapsed into the waves at Rock-a-Nore, near Hastings, on Friday.

The Environment Agency has warned the south coast remains at risk of coastal flooding throughout the weekend and early into next week.

Credit to ” lou lou ” for finding the link

Valentines Day Update , Its getting  silly down  in this part of the world, it seems a s though this little part of Sussex has been forgotten as it’s not  ” on Thames ”

That is not to detract from the horrible things people in the ” Surrey / Middlesex ” area are experiencing, or the  ongoing horrible  things in the west country ,

and what good does ” coming to see it ” do   what it needs is some Major funding  http://www.bognor.co.uk/news/eric-pickles-wants-to-see-pagham-beach-erosion-1-5870346

About me Bad Bits Better to Avoid Businesses Days Out dog stuff good Dubai 2014 Food And Drink Freebies that I have found Good Good ,Sneaky latte's & food Good Bits Its all about the Sharing Music is a big Influence to me News Non Sponsored not so good Dog stuff Not so good Sneaky Latte's & food Places Play Product Tests Recommended Places Recommended services Reviews Services skate Sneaky latte's & food Sponsored reviews The band The Local Area There Might be better options The Shop The Sneaky Latte Work

PBloggers…. What a nice place to Blog

A first time mummy grabbing parenthood by the dirty nappy and running with it!

................... for lovers of ice cream. Your free on line magazine for sweet frozen treats. Recipes, inspiration, artisanal ideas for your delectation.